Jeanne Hébuterne’s name resonates in art history because of the many famous portraits of the young woman painted by Modigliani housed between private collections and leading museums. Jeanne is remembered as Modigliani’s muse, model, lover and mother of the artist’s child, Giovanna (a.k.a. Jeanne). Indeed, the focus has been on the passionate and ultimately tragic love between Jeanne and Modigliani, condemned by the former’s family and poisoned by the latter’s erratic lifestyle and sickness, that ultimately ended with Modigliani’s death on 24th January 1920, followed less than 48 hours later by Jeanne’s suicide, aged twenty-one and eight-month pregnant.
It is only very recently that Jeanne Hébuterne the painter has emerged from the shadow cast by Modigliani – albeit through exhibitions that always associate her with the Italian painter and other Montparnasse artists. She was indeed a painter in her own right. Like her brother André who also aspired to become a painter, she studied at the Académie Colarossi in Paris, where she encountered Modigliani end of 1916.
This iconic striking self-portrait painted circa 1917 – around the same time Modigliani painted Jeanne’s first portrait – defies the known descriptions of Jeanne being a shy, quiet and delicate character. With her piercing almond-shaped eyes staring straight out at the beholder and her use of flat, bold colours, Jeanne seems to portray herself as a young woman, confident with her choice of moving in with her sick and drunken lover at her family’s despair.
According to Céline Georgette Hébuterne, André’s wife, Jeanne was a skilled painter and tailor, designing her own clothes. The Japanese-inspired robe she proudly wears in the present self-portrait is most likely one of her creations. Given the female artist’s premature death and the rarity of her works on the market, Jeanne’s self-portrait is a truly unique testament, depicting her as the young fair-skinned artist with her two long auburn-brown braids and black headband, the colour contrast of which had earned her the nickname “Noix de Coco” (coconut) from fellow Montparnasse artists. 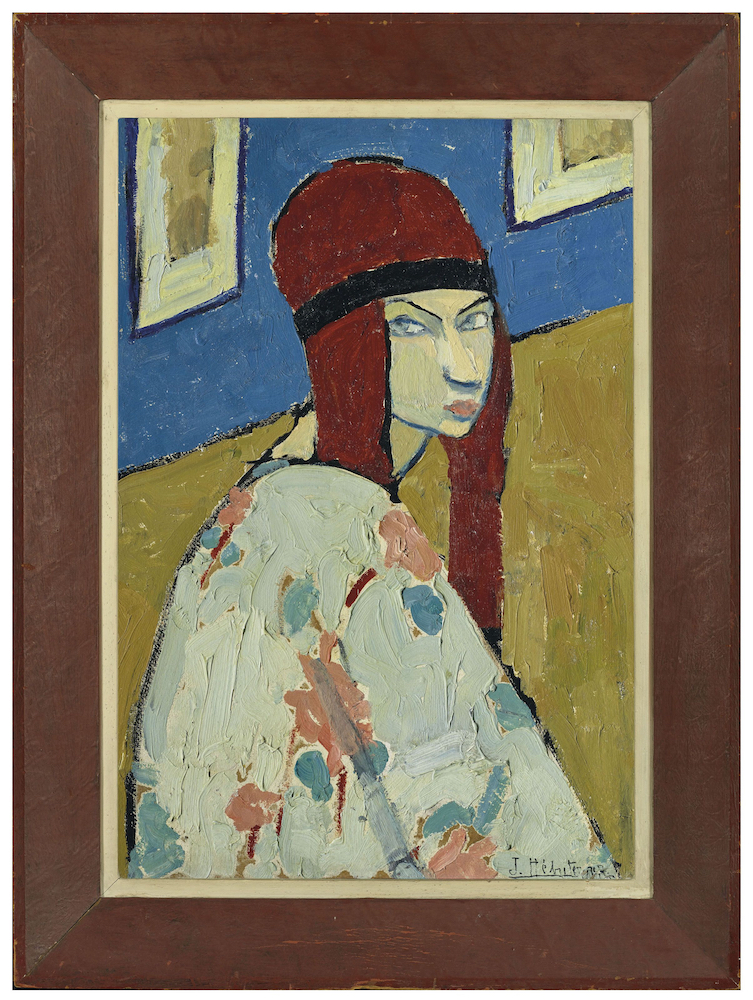 He had the head of an Antinous and eyes with sparks of gold – he was completely different from anyone else on earth. His voice somehow stayed in one’s memory. I knew he was poor, and no one knew what he lived on. As an artist, not a shadow of recognition.

He lived then (1911) in the Impasse Falguière. He was so poor that in the Luxembourg Gardens we always sat on a bench, not on the seats you had to pay for, as would have been normal. He never complained about this flagrant penury, nor about the flagrant absence of recognition. Only once in 1911 he said that the previous winter had been so hard that he could not even think about those nearest to him.

He seemed to me to be surrounded by a dense ring of loneliness. I do not ever remember seeing him acknowledge anyone in the Luxembourg Gardens, or even in the Quarter, where everyone knew everyone else. I never heard from him the name of a single friend or artist, and I never heard him make a joke …

The story of Amadeo Modigliani, a painter and sculptor whose career and life met an early demise, could hardly be more dramatic: at the young age of 11, Modigliani suffered from a serious case of pleurisy. In 1898, at age 14, he contract typhus—an illness that was considered deadly at the time. Later on, he suffered from chronic tuberculosis—which ultimately cost him his life at the young age of 35. Two days following his death, his fiancée Jeanne Hébuterne (who was eight months pregnant) took her own life.

Hébuterne and Modigliani are now buried together at the Père Lachaise in Paris. Her epigraph reads: “Devoted companion to the extreme sacrifice”.

But quite recently Modigliani has become the hero of a rather vulgar French film, ‘Montparnasse 19’. That is very bitter!

Written and Directed by Ivan Stanev